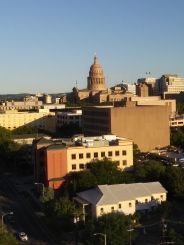 What at beautiful view!  This was taken from our room at the Capitol Sheridan where the 2019 TFRW Legislative Day was held on April 25, 2019.  Three members from HLRW comprised the delegation this year, Kathy Oles, Janet Mayne and Ginger Shilts.

We arrived on the 24th so we could visit the Capitol and get our bearings.  We attempted to visit with ur legislators, Rep. Andrew Murr and Sen. Dawn Buckingham but both were busy on the floor so we just signed in and left them a small gift of appreciation from our club.

That evening, we attended the “Belles and Boots” event put on by TFRW at Sholtz Garden.  It was a fun evening meeting and chatting with people from all over the state.  We met State Attorney General Ken Paxton, Sen. Donna Campbell, Justice Jeff Rose and a few other dignitaries.

On Thursday, we assembled at the Capitol Building for a group photo and then witnessed the opening of both the House and Senate sessions where they declared it to be TFRW Day!

Both Galleries were bathes in RED worn by women from all over the State of Texas.  We had a short visit with Senator Buckingham and then returned to the Hotel for a luncheon and workshops.

We are moving our meeting to a new location starting in May.  Please join us at Uplift Church, 301 TX Hwy 71, Llano (just west of Tractor Supply).

We will feature TFRW 1st VP Rhonda Lacy.  Meeting will start at 12noon and will include a catered lunch ($10).  Rhonda Lacy is a dynamic and well informed speaker.  She is VP for Membership.

We are happy to have the Host our TFRW President at our Club meeting.  K

aren Newton is dedicated to keeping Texas Red by fully immersing herself in Texas grassroots efforts. Karen is President of the Texas Federation of Republican Women and former Vice President of Finance for T.F.R.W.. She has served as Co-Chair of Campaign Activities for the National Federation of Republican Women, Recording Secretary for the Greater San Antonio Council and President of Alamo Heights Republican Women. Karen was appointed by Governor Abbott to the Texas Radiation Advisory Board in April 2016 and served on various committees with Congressman Lamar Smith. Karen Co-Managed the Donald j. Trump for President National Call Center in San Antonio during the 2016 Presidential election.

Before her involvement with TF.R.W. she dedicated 25 years to working as a community volunteer in and around San Antonio, with organizations such as the San Antonio Symphony League, the Junior league of San Antonio, Catholic Charities of Austin and Alamo Heights PTO.

Karen and Joe have been married for over 30 years and enjoy traveling, spending time at their home in Galveston with their daughter, two sons and daughter-in-law.

REMEMBER, the meeting will be held at the Meeting Room in the back of the Lyssy & Eckels Store at 105 E. Young Street.  Be sure to drive around the building and park in the back and use the entrance on the back side of the building.  Kevin will be catering our meal as usual and lunch will be $10.  Notify Tiffany by phone or email to make your reservation.

The old Schoolhouse Rock song says he’s just a Bill but we know him as “Bill Hussey!”  Bill is a local community member who is very active in all things political.  He is he founder and current Vice President of the Llano Tea Party.  He will give a presentation about the steps involved for a bill to become law, how we can become involved and the current mandate shared by Texas Republicans to KEEP TEXAS RED!

A message from our Membership Chair:

Let me tell you, I am excited about the dynamic new leadership of HLRW this year!  This club prays for our state and for our country and reaches out in various ways to our community (school kids and Vets).

The monthly meetings (2nd Tuesday at the Llano Library at noon) offers speakers to learn from about laws and leadership in local, state and federal governments, and the opportunity to fellowship with each other over the $10 catered lunch.

Texas is very important in the national elections.  So, let us unite to keep Texas Red (Conservative)!!!  Even if you belong to another club, come add to our efforts while we commit to add to yours!

I hope to see your sweet face on Feb 12th.  Mark your calendar!

2019 will be a rebuilding year for us.  Check in frequently to see our progress.  We are open to all ideas and suggestions on how to make HLRW GREAT AGAIN! 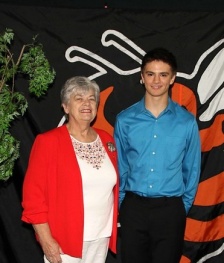 On May 27, 2015, HLRW awarded a $1000 scholarship to Dalton Ward, a local Llano High School Senior.  In August, Dalton enrolled at Texas Tech in Lubbock.  We wish him well in his studies.  Here is a copy of his winning essay:

While a militia is less of a priority today than it was in 1791 when it was ratified, I still believe in the idea of civilians being able to fend for themselves.  Not only does the 2nd amendment make its supporters feel safer, it also proves useful to them in the event of a catastrophe.

The piece of mind that a firearm can grant its carrier can prevent them from feeling unsafe and unprotected.  Without the ability to defend themselves from a potential attacker or threat, people feel vulnerable and sometime afraid.  The people of America should never feel this way.  According to the fathers of our country it is the duty of the government to ensure the safety and well-being of the governed.  Regardless of if you support the right to bear arms or not, you more than likely agree that we should be able to feel safe in our own home.  For some people, they will not feel safe without a firearm in their home.  These people deserve the right to their firearm, considering they follow all rules and regulations set by the government.

I recognize the fact that some people shouldn’t  have firearms regardless of their rights, people that have killed, are suicidal, or with an extensive criminal record.  Today, firearms are legal; today there are these types of people that are able to obtain firearms.  The reality of it is, is that these people that should not have a gun, have obtained them illegally anyway.  Taking away everyone’s right to bear arms will not totally stop these people from obtaining a firearm.

Our 2nd amendment should be preserved, times have changed from the 1700’s but the amendment is still relevant to today’s world.  To take away our right to bear arms is to take away many people’s sense of security. 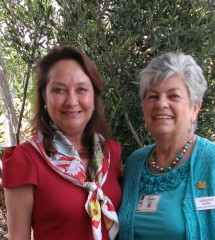 Cecilia Abbott is a product of the American Dream. The granddaughter of immigrants from Mexico, Cecilia was raised in San Antonio by parents who were both educators. They instilled in Cecilia, her sister and two brothers the power of education.

The First Lady has played important roles in education excellence in Texas. She was a teacher, vice principal and then principal at several schools across Texas. Most recently she served as the principal of the Cathedral School of St. Mary in Austin from 1996 to 2001. Governor Perry appointed Cecilia to the State Board of Educator Certification, where she served from 2001 to 2008.

Mrs. Abbott also focused on health care for seniors. From 2004 to 2013, she served as the managing director of community relations at Harden Healthcare, a network of senior adult health care facilities and services.

She serves on the University of St. Thomas Board of Directors and the Huston-Tillotson Board of Directors, as well as the advisory boards for the Holy Trinity Seminary, and the Austin Diocesan School Advisory Board. She is also a member of the Women’s Symphony League, the National Charity League, and the Dell Children’s Women’s Trust. She is a former member of the advisory board for the National Center for Missing and Exploited Children, Ballet Austin and the Principals’ Center at Harvard Graduate School of Education.

Cecilia is a classical music devotee, having begun piano training at the age of six. The training came in handy when she moved into the Castilian Dorm at UT where she serenaded her future husband from behind the keyboard with music, the likes of which he had never heard.

Cecilia Abbott made history when her husband Greg became Governor of Texas by becoming the first Latina First Lady of Texas in the history of the state. She is a proud wife and mother. She and Greg have been married for 33 years, and they live in Austin with their daughter, Audrey. 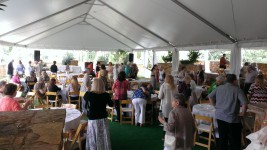 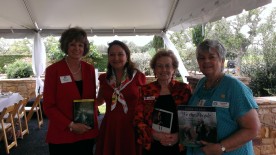 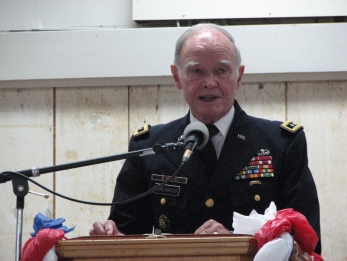 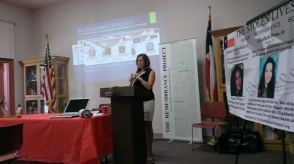 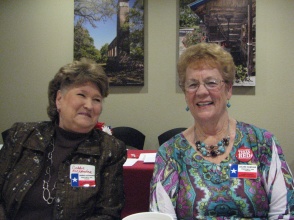 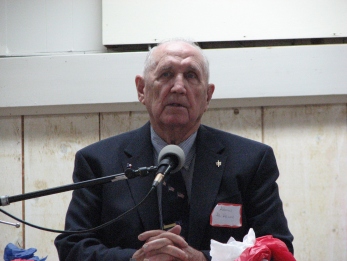 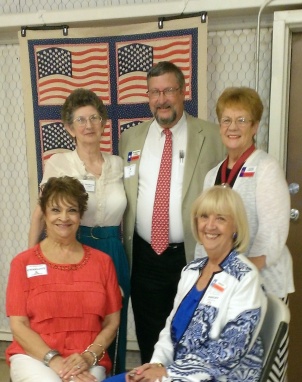